It’s official: The VW Bus is back, and it’s electric

The I.D. Buzz concept will go into production, sparking a new generation of Microbus fans

From the Volkswagen News Room

Driven by popular demand, Volkswagen announced today it is planning on selling a production version of the award-winning I.D. Buzz concept electric vehicle in 2022 for the United States, Europe and China.

“For me, the I.D. Buzz concept is the most beautiful and most exciting electric car in the world,” said Dr. Herbert Diess, Chairman of the Board of Management for the Volkswagen brand, in Pebble Beach, Calif.

“Our goal is clear: we want to make the fully electric, fully connected car a bestseller around the world. The iconic car of the electric age must be a Volkswagen.”

Designed to recall the original Type 2 Microbus without mimicking it, the I.D. Buzz concept has won several awards in the months since it was revealed at the Detroit Auto Show. The front V in the bodywork calls back to the two-tone predecessor on the original Bus, but in the I.D. Buzz carries a light strip that surrounds the vehicle and gives it a unique visual signature. The LED headlights have hexagonal segments that act as “eyes” to communicate the vehicle’s status. With near-zero body overhangs and 22-inch wheels, the I.D. Buzz manages to look modern and timeless, one of the hallmarks of Volkswagen brand design.

The first VW Bus sold in the United States in 1950 had all of 30 hp. The I.D. Buzz concept sports 369 hp from electric motors on each axle that also provide all wheel drive and the 111 kWh battery pack in the floor of the MEB chassis provide nearly 300 miles of estimated range. Using a VW fast-charge system, it can recharge about 80 percent of its energy capacity in 30 minutes at 150 kW.

The I.D. Buzz concept also offers a preview of the type of autonomous technology that VW will develop for future models – namely its fully automated “I.D. Pilot” mode that could go into production by 2025. From the fold-away steering wheel and pop-up laser scanners in the roof to a heads-up display that integrates augmented reality, the I.D. Buzz does not lack for innovation. 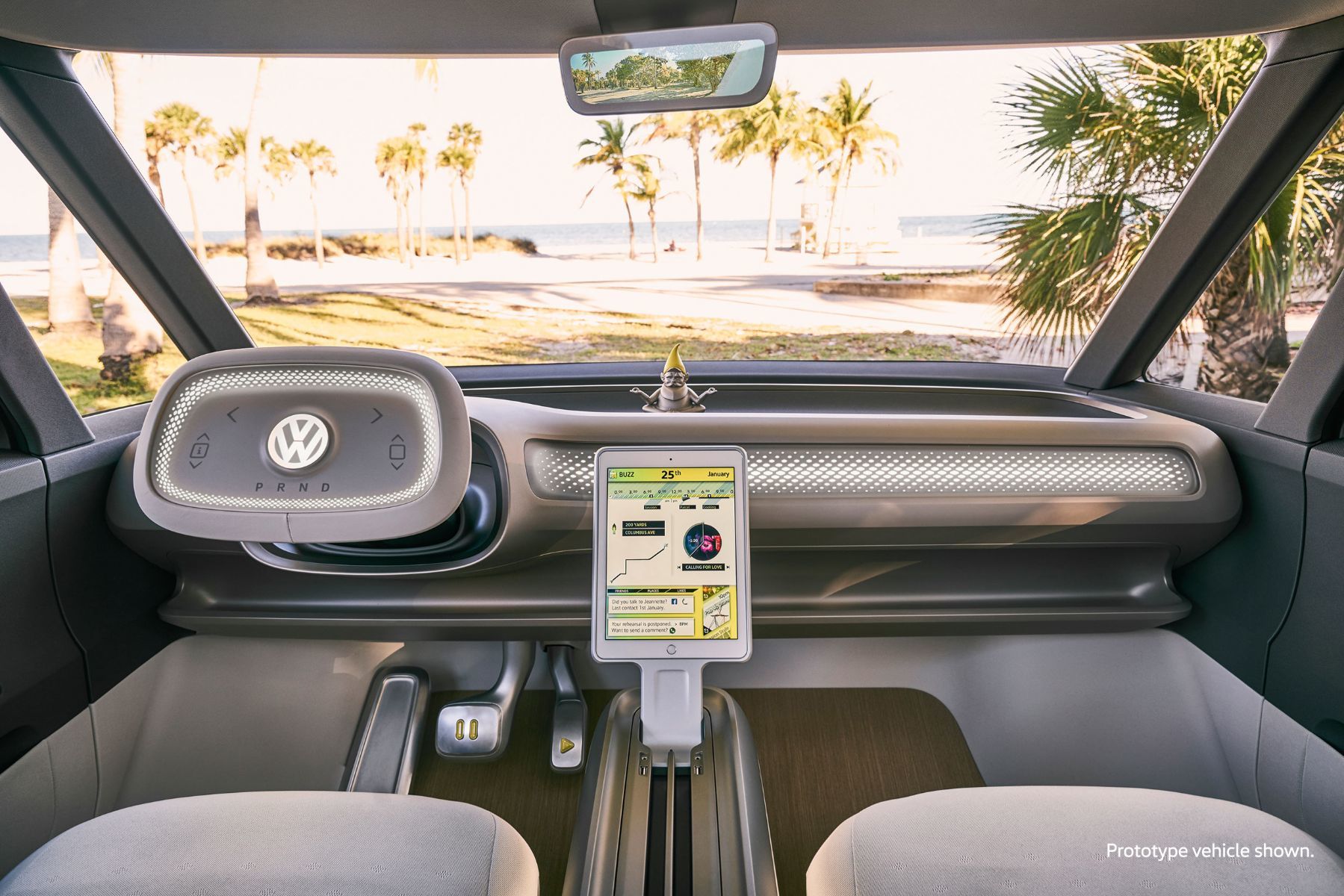 “The I.D. Buzz stands for the new Volkswagen,” says Diess. “We are fully committed to the future of mobility, and we want to reignite America’s love for VW.”

Standing beside Diess at the Pebble Beach announcement was Ben Pon Jr. His father, Ben Pon Sr., was the first VW importer for the American market and a major initiator of the original VW “Microbus” concept. He sketched the rough outline on a napkin during lunch one day in 1947. Thanks to Volkswagen designers and engineers, the rest is history.

Today that napkin is on display in a museum in Amsterdam, and the vehicle itself went on to even greater fame. With its compact exterior, spacious interior, and a design that seemed to put a smile on every face that saw it, the VW bus became “one of our most beloved cars,” says Diess.

That was especially true in the United States in the 1960s and ‘70s, where a VW Bus represented freedom. 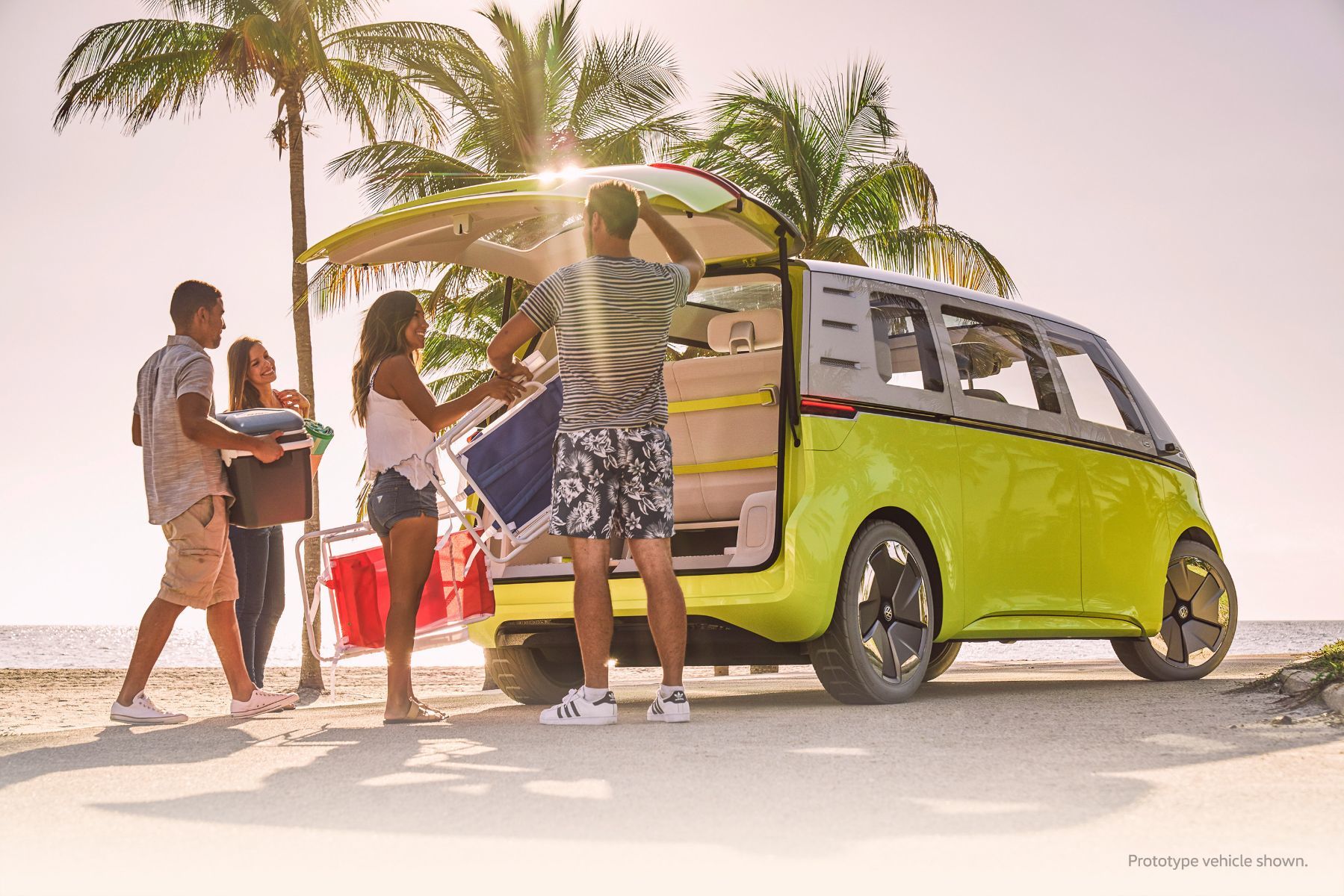 “It took you everywhere with your friends, it was a car but also a home on wheels, it was both reliable and unconventional, it was highly emotional,” says Diess. “It was and still is a wonderful car.”

The new I.D. Buzz will be the seventh generation of the bus. Over time, the vehicle evolved in style but always retained its character, versatility, and ability to draw or carry a crowd. Still, the original version — affectionately called the “splitty” by aficionados for its split front windshield — remained the most iconic design.

The exterior I.D. Buzz harkens to that first generation. It sports a two-tone V-nose, rectangular windows, a hint of a windshield sunshade, and a gesture at the rear side air vents that characterized the original.

At Pebble beach, Diess asked Pon Jr. what he’d like to see in the newest generation of the bus.

“I saw it already,” Pon replied. “It looks absolutely great and I’m sure you will be very successful with it!” 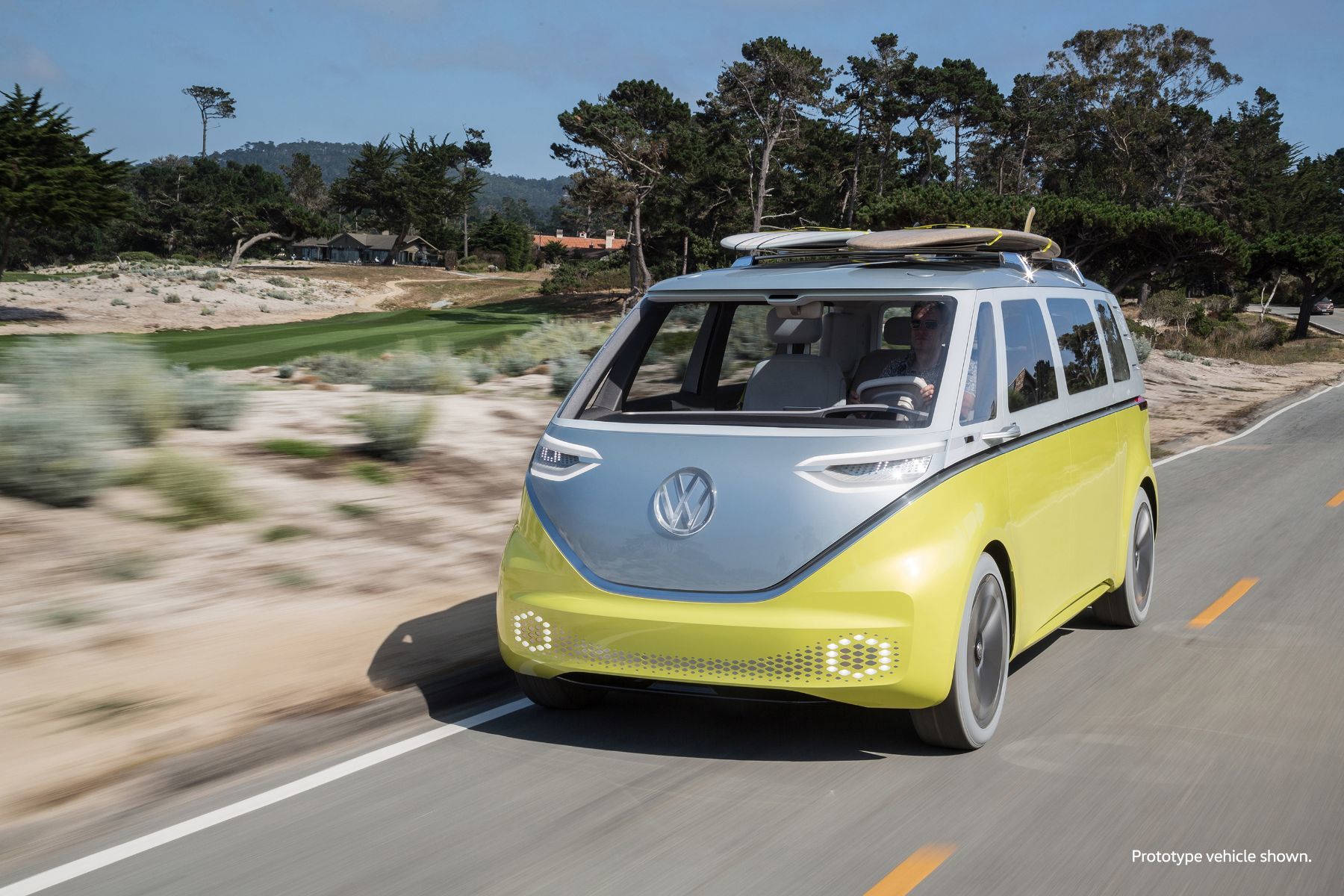