VW came and conquered the course with 99 hairpin turns.

Better make more room in the trophy case, because Volkswagen’s ID R electric race car has set another record. This time, VW tackled Tianmen Mountain in China, where it set a 7:38.58 time to set the world record.

Better make more room in the trophy case, because Volkswagen’s ID R electric race car has set another record. This time, VW tackled Tianmen Mountain in China, where it set a 7:38.58 time to set the world record.

China’s Tianmen Mountain stretch includes a whopping 99 hairpin turns over 6.77 miles; driver Romain Dumas conquered the twisting route as it swings its way toward Heaven’s Gate. The entire road is made up of the quick hairpins and short straightaways where Dumas reached speeds of 143 mph. Through it all, Dumas ensured no contact in extremely narrow tunnels, some of which required plenty of braking before exiting the darkness. 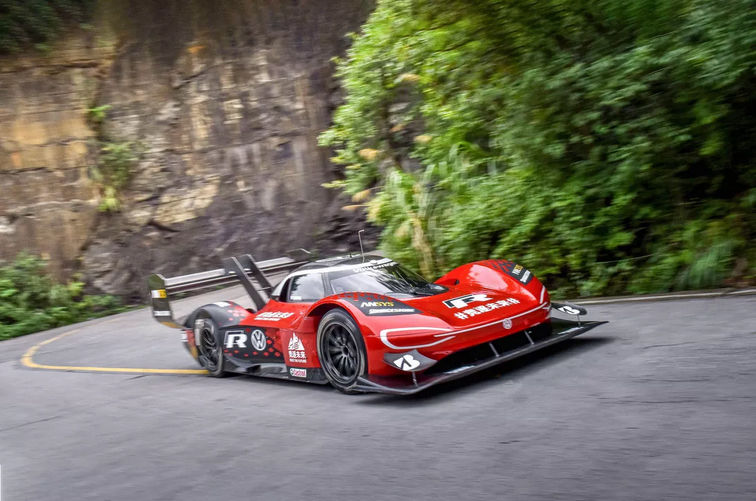 With the Chinese record, VW and the ID R now hold records at the Pikes Peak International Hill Climb, Goodwood Festival of Speed hillclimb and Nurburgring Nordschleife. The German automaker has been keen to parade its electric race car around the world as an ambassador of sorts for the forthcoming line of ID electric cars for purchase. The first will be the ID 3 electric hatchback that’s set for debut at the 2019 Frankfurt Motor Show. It’s not coming to the US, but we’ll get plenty of other ID-branded EVs; an electric crossover and electric van in the spirit of the Microbus are among the models confirmed for our market.

None of them will perform quite like the ID R, though. Two electric motors create 680 horsepower and 479 pound-feet of torque. For each outing, engineers have tweaked the body and aerodynamics to ensure Dumas could make as much use of regenerative braking and a drag-reduction system as possible. No one wanted to see the ID R run out of juice during a record attempt, and it never did.

Where the ID R heads next, we don’t know. We do know that the ID R is shaping up as something for the history books in the world of motorsports.

Read more on RoadShow by CNET.